We resolved to finally get an early start on things, like proper cycle tourists. And I really thought it was going to happen.

I woke up at 7:10, made a nice pot of oatmeal, ran down to the concessionary to grab a couple of danishes and some OJ, and woke Bethany up for breakfast.

After breakfast, she hadn’t perked up like I expected her too. I asked her what was wrong, and it turns out that her carpal tunnel was bothering her all night and she slept very poorly. She was willing to go on, but it would not have been very fun. We’re on vacation; that’s not allowed! So she went back to bed and I watched 3 episodes of House, M.D. on the iPod we use to back up our pictures.

If yesterday was hills, today was wind. It was rarely blowing right at us, but it was most often blowing at 90 degrees to us. That’s not much fun on a loaded bike! We did have some time with it behind us, though. It’s still blowing good; hopefully we pegged our tent down properly!

The road today was very nice for the first half of our journey. It was a paved, dedicated cycle path that mainly paralelled the main road but stayed far enough away so that we were up close in the thick of things. Much of it followed what appeared to be a long gone train track.

For much of the latter half of today, the trail did basically two different things; either it followed along a gravel road, or it was along the very narrow shoulder of a relatively busy road.

And the scenery got more boring. The farms and towns got further apart. At one point we had a 3 kilometre long straight stretch; I think that’s the longest straight stretch we’ve had so far. 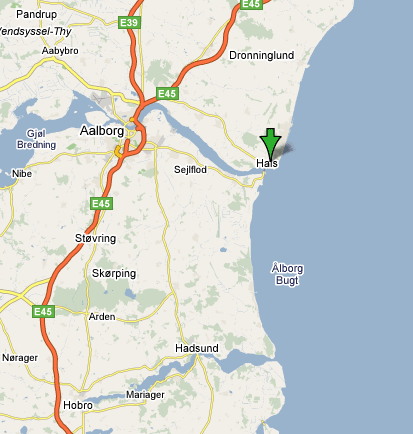 When we hit the sea coast, we got our dedicated cycle path back. We followed that for about 10 kilometres and then took the ferry into Hals.

At Hals, we picked up a couple steaks, some vegetables and breakfast. Bethany fried the steaks up blue rare, and they tasted great. This is the first time we’ve cooked our own food, excepting breakfast and making sandwiches once. GIven the price of food here in Denmark, we should prbably do that more often.