Today it was off to see the main event: the Galapagos Islands. Why did we want to go to the Galapagos Islands? The islands have always been on my dream destination list due to their Charles Darwin fame. I never actually thought that I would get there but when the opportunity arose to travel somewhere, we wanted to go somewhere different, something activity heavy, and not Europe. I have known a couple of people who had made the trip to Galapagos and they highly recommended it. So we went for it.

The morning started early in Guayaquil with breakfast and then a transfer to the airport. The airport is very close to the centre of town and is new and modern. However, it is too close to town and they need more space for more runways, so they are planning to build a new one further out. Seems a shame.

The plane to Galapagos was larger than I expected: an Airbus 319. As part of the protection of the delicate ecosystem of Galapagos, an insecticide was sprayed throughout the plane prior to landing. Also on arrival, the bags were examined by a police dog prior to being released. 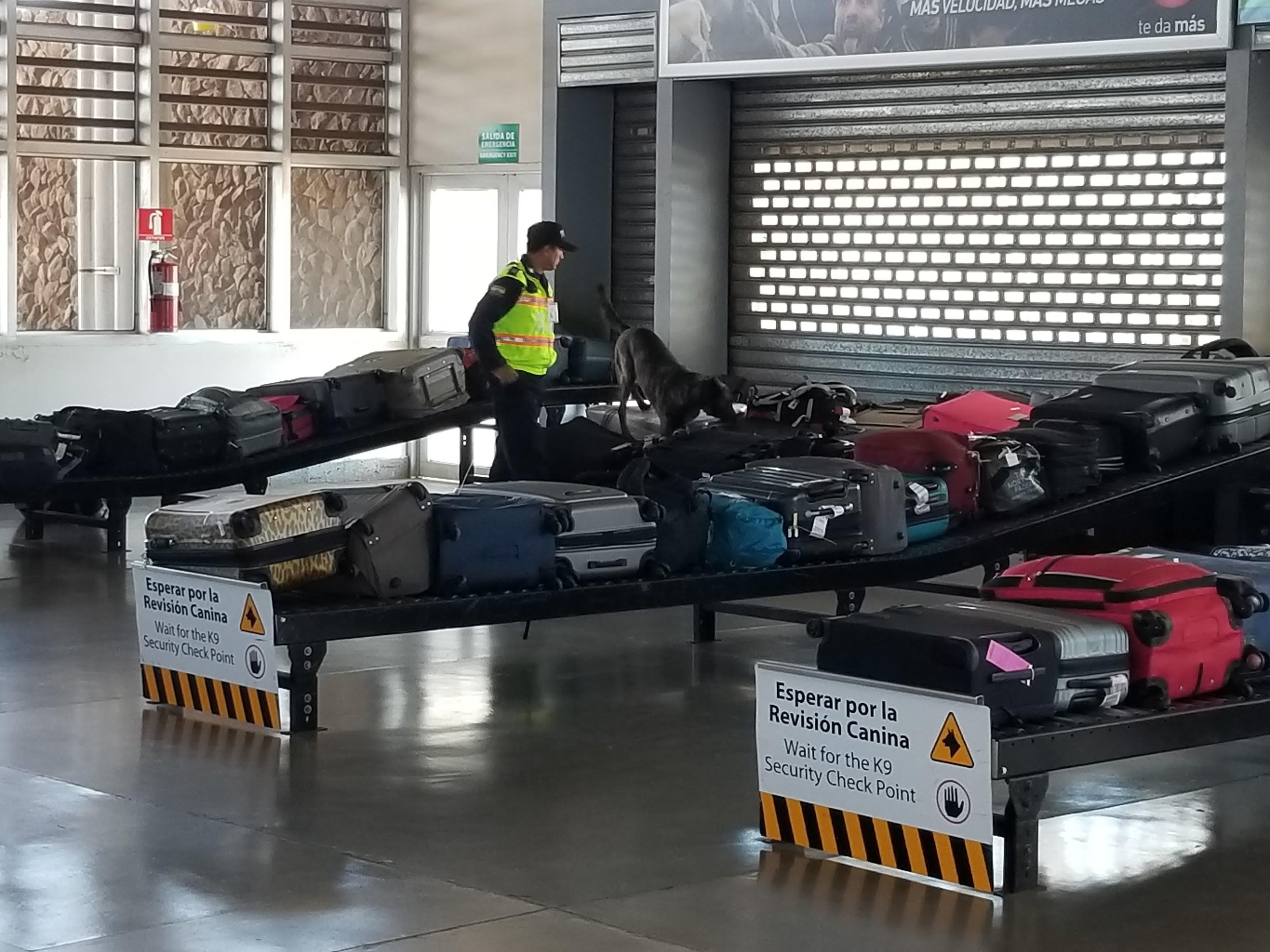 The flight to Galagpagos was about 1-½ hours. Then we started to see islands of the volcanic archipegalo. The first island was brown and barren looking and the phrase “Hell on Earth” as the early seamen described seemed very apt. It is currently the dry season and many trees have lost their leaves and have become dormant. It looked like a desolate land for which we were heading. And Balta, the island where the airport is located, is definitely barren and brown right now.

We landed, cleared the customs, obtained our bags, and headed to meet our guide and driver for the day. First we needed to get off the island and cross a narrow channel to the Island of Santa Cruz, which we did so by small water taxi. Then it was into a small white Toyota Hilux which served as our land taxi. It is 42 km from the north end of Santa Cruz to the town of Puerto Ayora in which our hotel is located.

Along the drive, we started in barren and dry land with a dominance of cacti. But as we climbed in elevation, more and more green came into view and the vegetation changed to deciduous trees. We had a brief stop at Los Gemelos which are 2 volcanic sinkholes. We were introduced to the finches (for which Galapagos are famous because of Darwins Theory of Evolution) and some invasive plant life were pointed out such as blackberries.

Onwards we climbed and then started down the windward side of the island which was noticeably lusher. For lunch we stopped at a Giant Tortoise Reserve where we were able to view these mammoth reptiles from up close. Many of the largest were over 100 years-old. They moved slow and steadily and didn’t seem to mind blocking the road.

We then proceeded to the town of Puerto Ayora from which we caught a water taxi towards our Hotel, Finch Bay. The hotel is a nice complex: rooms are neat and the common area very appealing. We quickly changed into bathing suits and headed out walking through volcanic trails past a salt marsh to La Grieta, a rift popular for swimming. La Grieta is a series of three pools formed by a chasm in the land. The water is salty and deep in the middle. The middle pool was small and needed to be reached by climbing over rough and slippery volcanic rocks. There were three small marine iguanas eating away at the seaweed on the rocks which were not bothered by our presence. The third pool could be reached by an underwater tunnel about 3 feet below the surface and about 3 feet long. Alas without goggles, we opted to go over the surface rocks. Those who did do the tunnel said the the going was easier than the return as the tunnel slanted up going but down on the return. We made it to the end of La Grieta and then returned to the hotel, showered, and ate supper.

This first day, we have already seen many animals: frigate birds, a heron, Galapagos dove, giant tortoises, finches, marine iguanas, and a sea lion. Tomorrow, we are off to see more marine life. 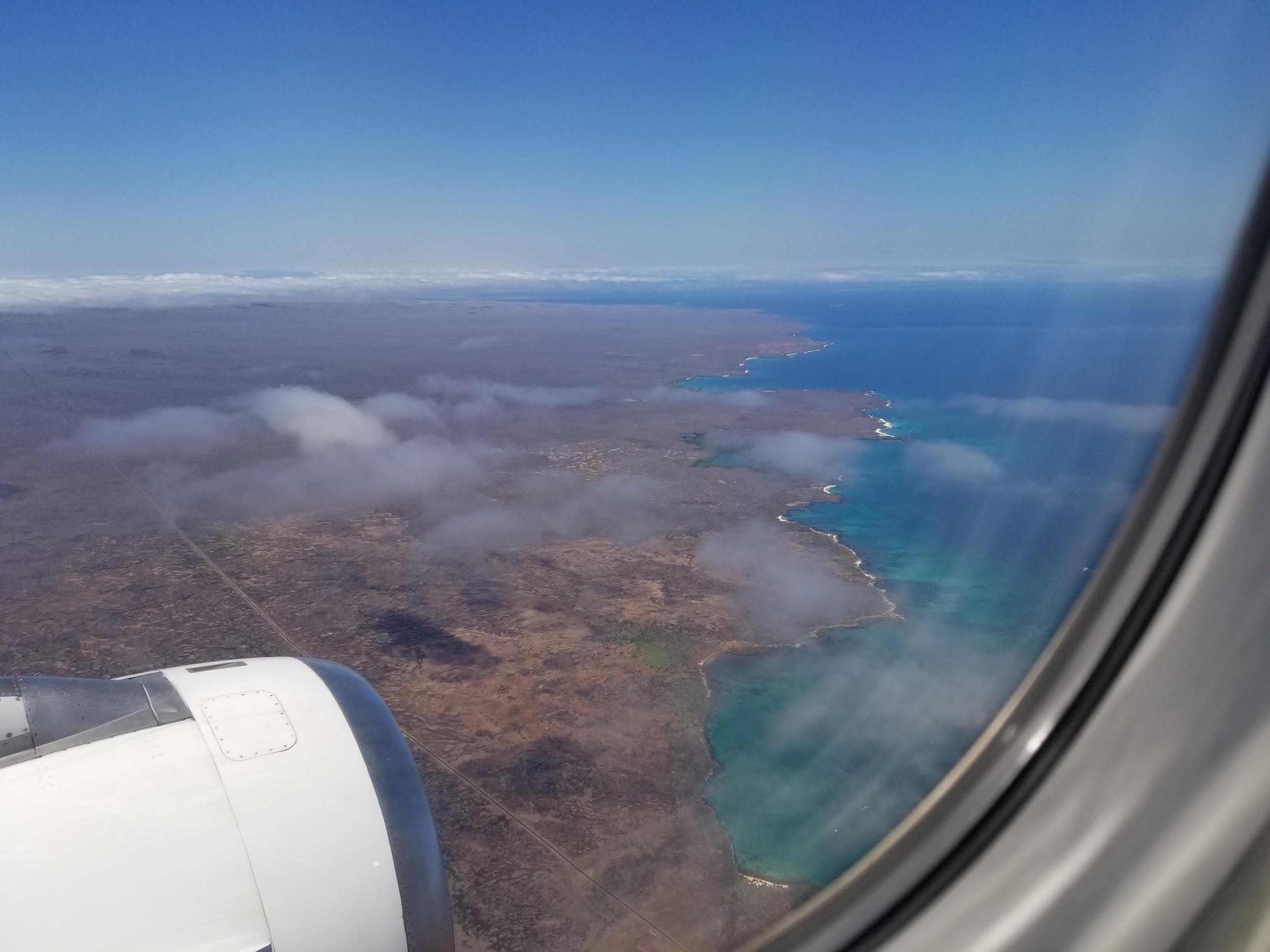 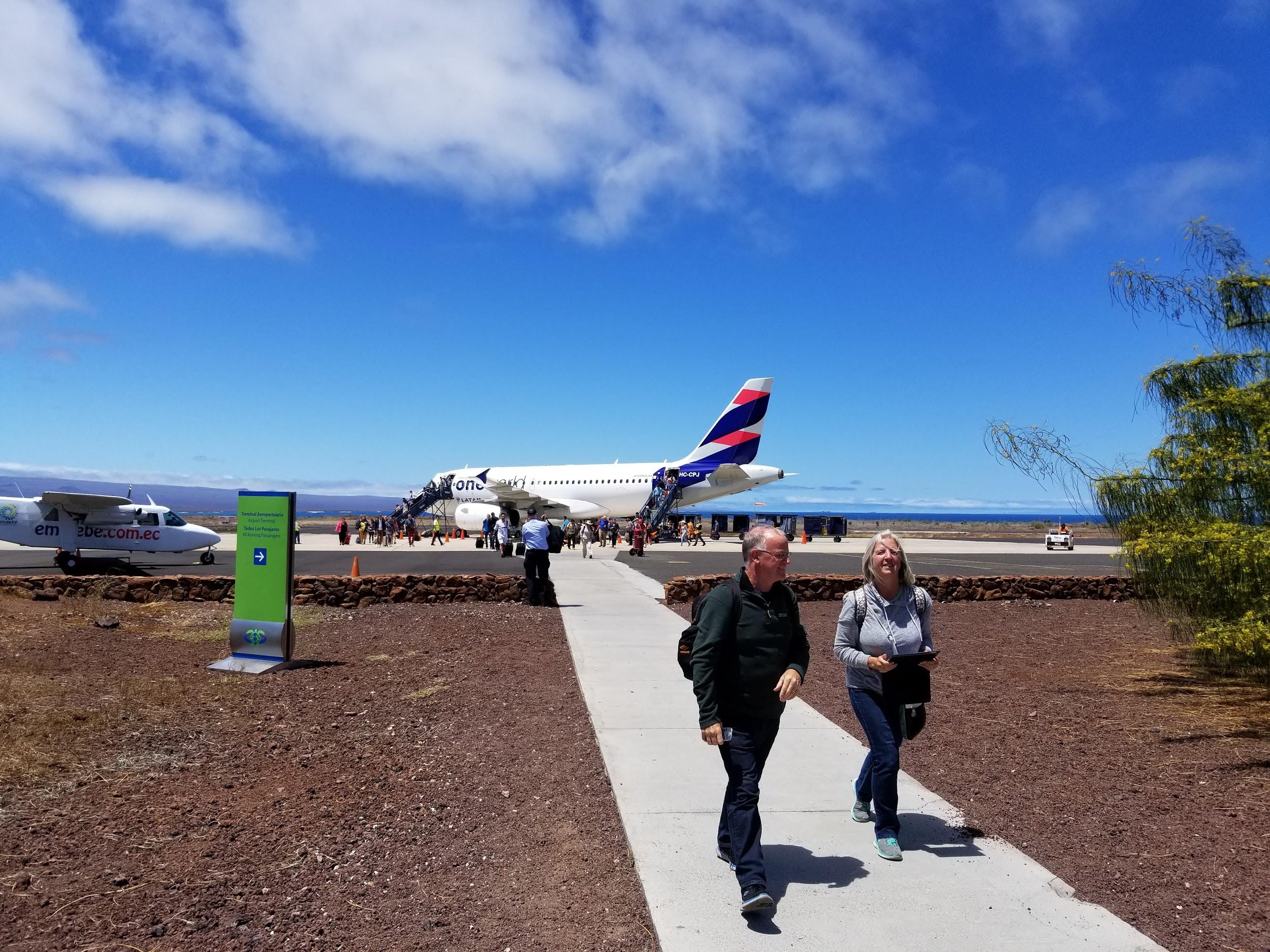 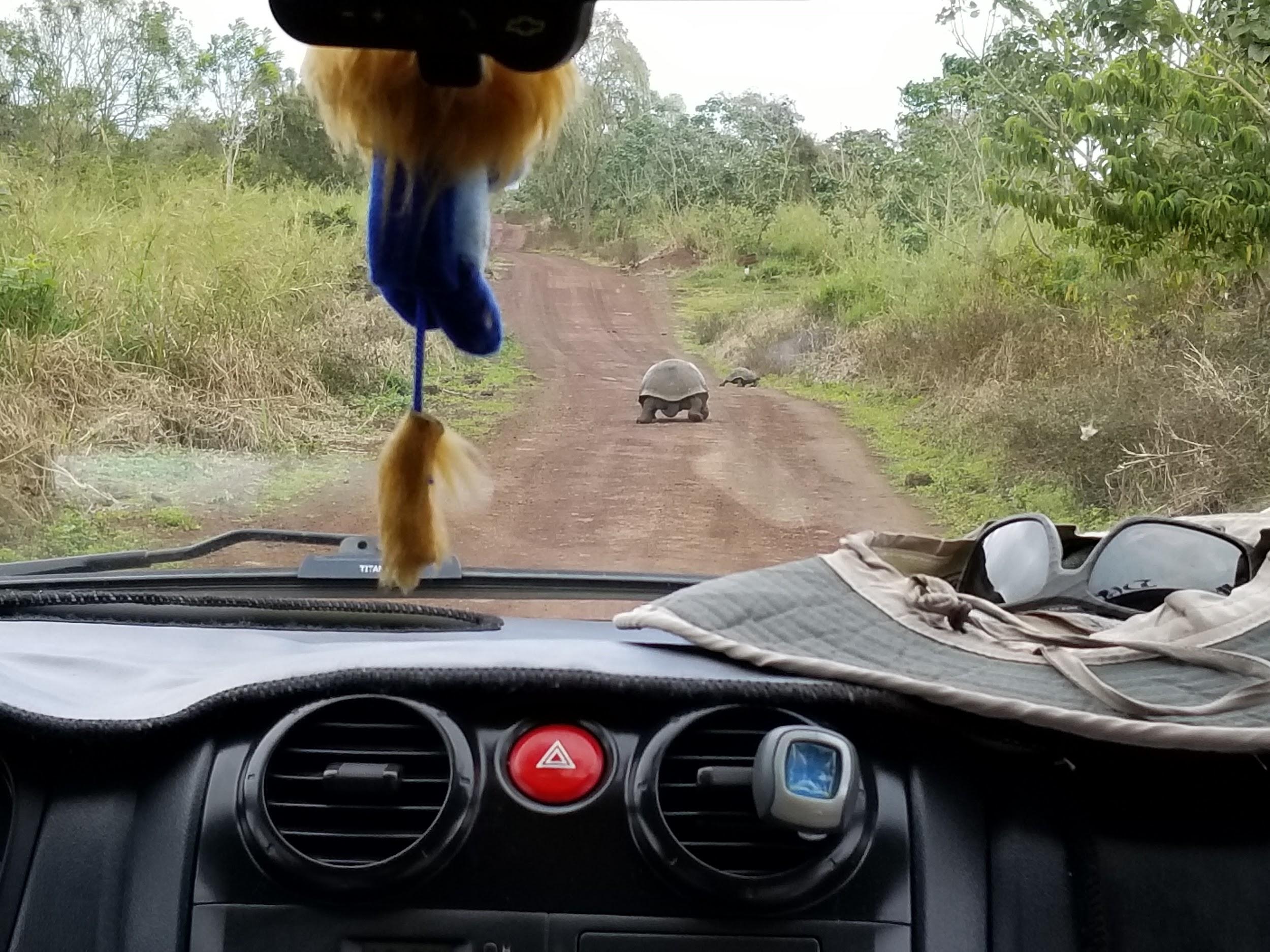 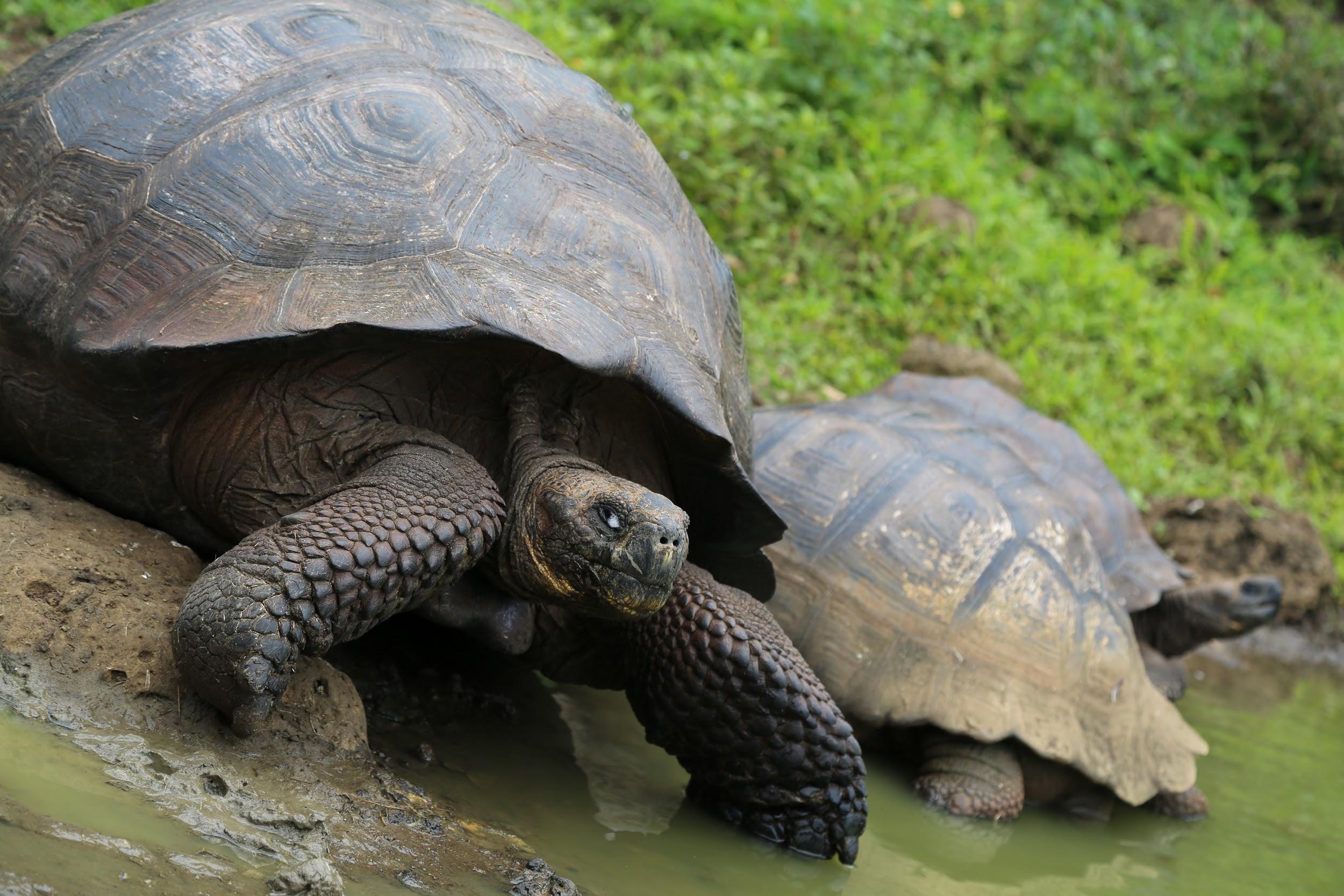 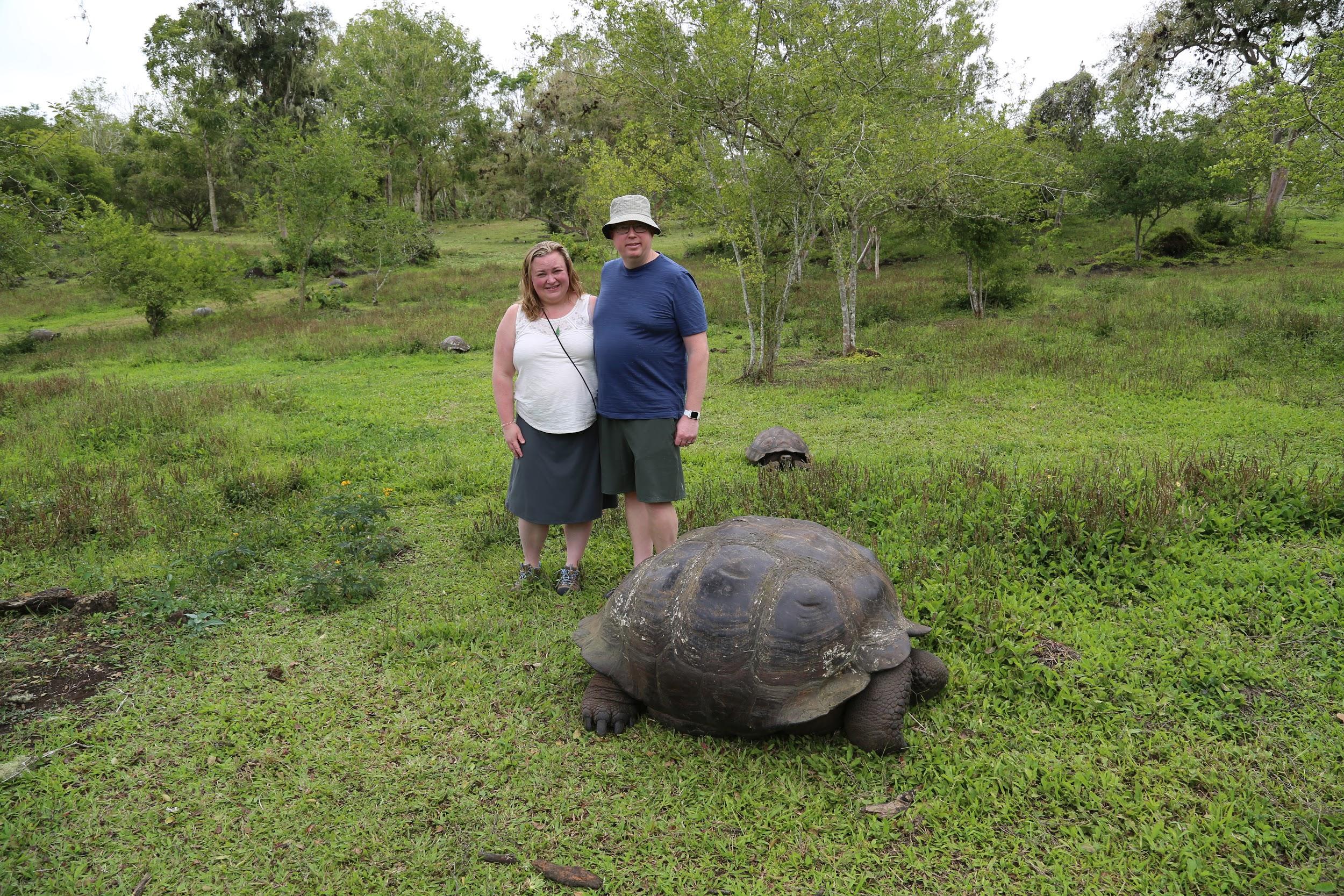