Yesterday we had a fabulous day for cycling allowing us to travel over 100 km from Skagen to Løkken. The weather was warm and clear with a favorable wind. More importantly, my hands and my neck were not bothering me significantly. Many may be aware that Bryan and I didn’t train for this trip. Perhaps we shoud have. The previous two summers I have done a lot of cycling but for various reasons, I did not spend much time on my bike this summer. I’ve had probems with carpal tunnel before but never anything that persisted to the point I have wanted to do anything about it. My neck has never been a problem before with cycling. I’m wondering if I’m experiencing positional fatigue (although my bike has a fairly relaxed geometry) or if I’m still recovering from my injury just prior to the trip. I’m sure it would make me more susceptible. Anyway, for whatever reason, yesterday I wasn’t as limited by discomfort. Today was okay too with little breaks but we only went half the distance.

Sunday, we made it to the top of Denmark. I love the wildness of the windswept sand spit of Grenen with the crashing of two seas. I’ve been there twice previously and have probably been more moved at those times. Partly because the light of July, particularly dusk, is more spectacular than that of September. Partly because the town is very quiet now unlike the bustling summer. Partly because I don’t think Bryan shared my fascination of the barren landscape. He prefers the more agricultural areas. From Skagen we travelled to Hirtshalls and then down the coast to Løkken. We joked about catching a ferry to Norway. I probably would have if Bryan had been serious. I have been three times to Denmark but not once to Norway which has equal claims to my heritage. We considered stopping a couple of times along the way. Just before Hirtshalls we passed a farehaven which was a covered, yet open, shelter where a walker could shelter for the night. I had noticed signs designating similar things previously. Bryan and I were fascinated and would like to spend a night in one – should we come across one when we are seeking to stop for the night. We did find a second one yesterday but it wasn’t as appealing as the first and we wanted to push on with the nice weather. Today we woke in camp ground which looked as though it was closed despite still being open in our camping guidebook. The flags were taken down and the grass was overgrown. However, we were able to get into the washroom and this morning a women in a nearby farmhouse took 50 kroner in payment (normally campsites have been 125-175 kroner). We again had a late start. We woke up and had a breakfast of quick oats sweetened with wine gums and chocolate but then ended back in the tent for a nap when a light rain passed through. We finally packed up, stopped in town for a few groceries to make a lunch, and then headed south. Of course, by the time we actually started cycling, the rain was back. Bryan had a flat tire about 16 km out. He discovered that fixing a flat in the rain was not as annoying as he had imagined if you have rain gear.

As today’s weather was not conducive for sightseeing, we were intent on just putting some miles behind us so that we would not be late to pick up Bryan’s glasses in Thisted. We had been aiming for a town with a hostel but the pouring rain and darkening skies urged us to stop at a timely-appearing hotel.

We arrived soaking wet from the hips down and the neck up. I love my gortex jacket. Bryan’s jacket is a plasticized paper which he says is working well too. We unloaded our bikes and headed to another nearby hotel for supper. We walked into a 157 person get-together for the mentally disabled. We had a fine buffet, listened to live music that reminded me of a family reunion, and waltzed around the buffet table. We must have made an interesting looking dance couple with my rain-drenched and wind-tangled hair and our cycling clothes. Cycling shoes definitely do not make good dance shoes. It was a pleasurable evening.

We returned to our hotel room to spread out the contents of Bryan’s panniers to dry. Many items were damp but not as waterlogged as we expected. He is travelling with Arkel bags and I have the more waterproof Orliebs which held up well. 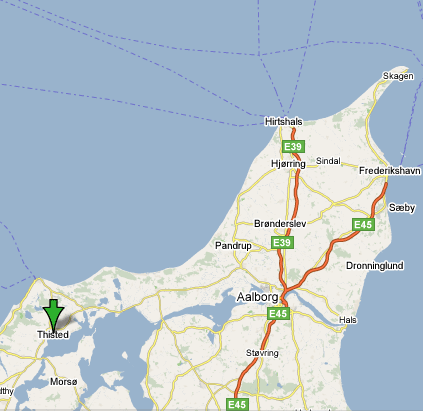 Tomorrow it is on to Thisted so we can make our appointment with the optician and I can contact family. Not very many people have commented about Bryan’s glasses but an elderly man today asked if he had fallen off his bike and another woman said that “it did not look good”. She herself had broken her glasses on a vacation and guessed correctly that he had dropped it in the bathroom. Now, on to a shower for me. Bryan has supposedly cleared it of the 50 or so mosquitos that inhabited it.